It’s fall and the eating is good… at least I think it is because around these parts produce is still inexpensive and I loaded up on all sorts of peppers. Recently I have bought what I call mild and hot Italian long peppers, shishitos, poblanos and a bunch of bell peppers.

As you might already know (check out the last blog post if you don’t!) long peppers and shishitos make a great appetizer when they get all chared, delicious and dipped into a garlicky sauce. But what you don’t know, is that I experimented making a confit with the long hot peppers and now have a hot pepper oil ready to sprinkle on pizza, these Italian sausage subs, or really anything that needs a little kick. And I also roasted, peeled and froze the poblanos – but I still don’t know what I will do with those yet.

Now, my original plan was to stuff the bell peppers for dinner one night this week, but I was starting to feel a little nostalgic. Italian sausage subs were something my family made often, but it also was a snack I would look forward to when going to my brother’s football games. Especially the playoff games that took place in late September and October – just think the cold fall air, blankets and cushions so your butt doesn’t get cold from the stands, and a delicious, hot Italian sausage sub – perfection. And the reason for Italian sausage subs on the blog.


For one, you gotta love the sausage you’re starting out with. If you don’t already love the sausages you are going to use it is likely that you won’t like the end result. Typically I like the hot Italian sausages that are made by a grocer close to my nonna’s apartment – if not, a lot of grocery stores in Montreal carry Roma Sausages, and I think they are always a good bet (they even make a gluten-free variety!).

But you can also keep the sweetness and turn up the heat. I prefer using hot Italian sausages as mentioned above and so I’d definitely recommend using hot if that’s what you like. However! You can also throw a poblano pepper into the pepper mix or top your Italian sausage sub with some pickled banana peppers! 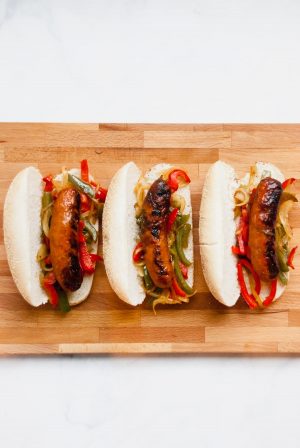 Flavorful sauteed bell peppers and onions with Italian sausages make these Italian sausage subs a star of the sandwich world. Plus, the recipe makes three subs, because you’ll want to split the third!

Here I try and limit the number of pans being used, but you can cut the cooking time in half by sauteing the vegetable in one pan and cooking the sausages in another. Alternatively, you can grill the sausages!

Also, while I like these Italian sausage subs as is, some like to jazz them up with added mustard or horseradish. You can also add pickled banana peppers or poblanos in the pepper mix!

Tag @thebeaderchef on Instagram and include the hashtag #whynotmakeitdelicious I wanna see your tasty creations!