Yummy gooey butter sugar caramel and pecans cover these yummy doughy cinnamon rolls. They are perfect for a Valentine’s Day treat with your sweetie and the whole family! 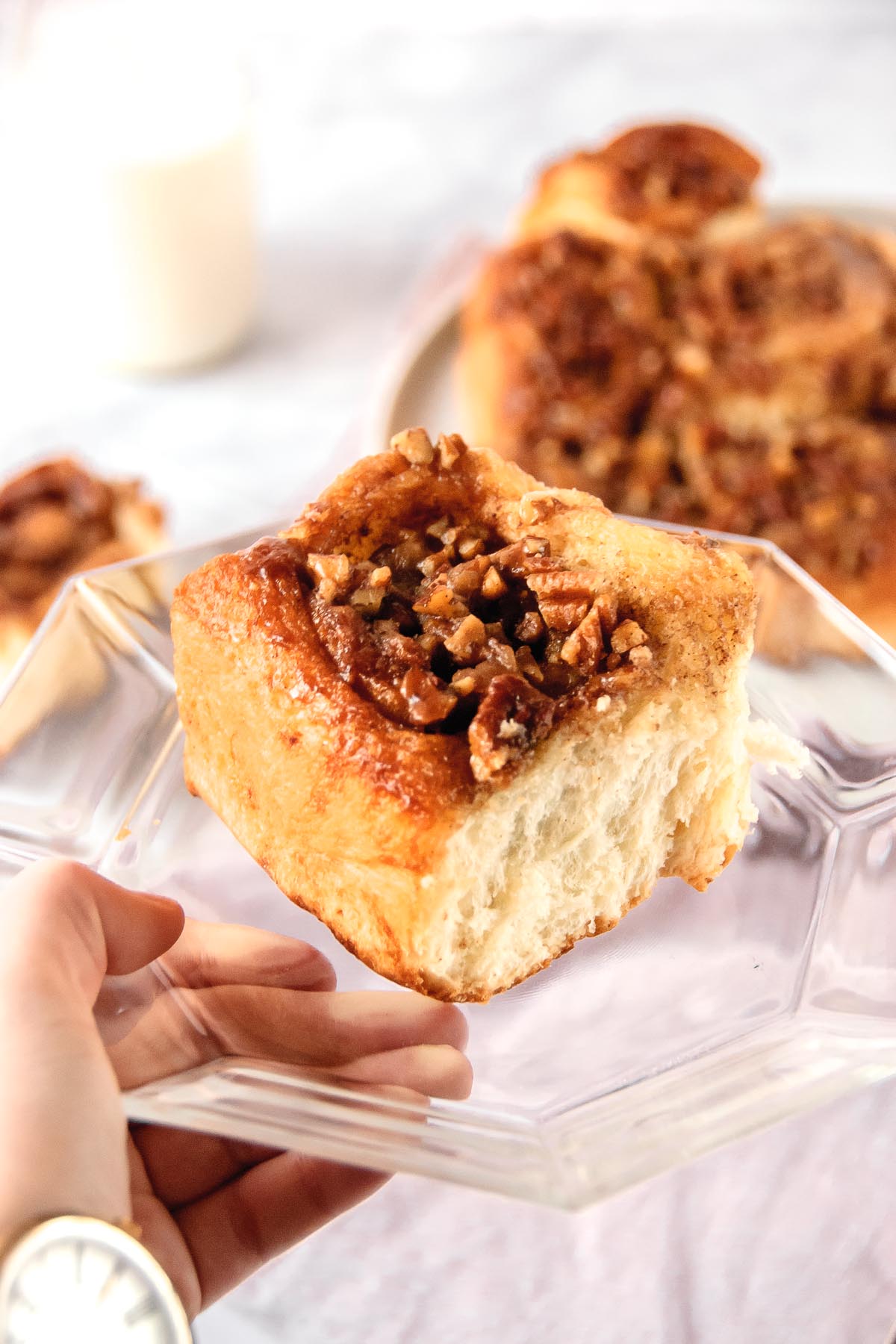 This Recipe is sponsored by JORD Watches.

Valentine’s Day was always a special day at my house. It meant eating my mom’s homemade cinnamon rolls and it was a real treat because she would only make them for Valentine’s Day.

To this day she believes that some foods should only be made for specific occasions because that is what makes them special. Examples for her would be these cinnamon rolls, Christmas cookies, apple pies in the fall, and pumpkin pie (although she has wavered on this one once, she’s made pumpkin pies for my brother’s birthday cake per his request).

This year was special: we got together to make the cinnamon rolls together, because: they are a labor of love to make (although the recipe is simple), baking is always more fun with another person, and during the rising time we did some shopping – this is where JORD Watches come in. 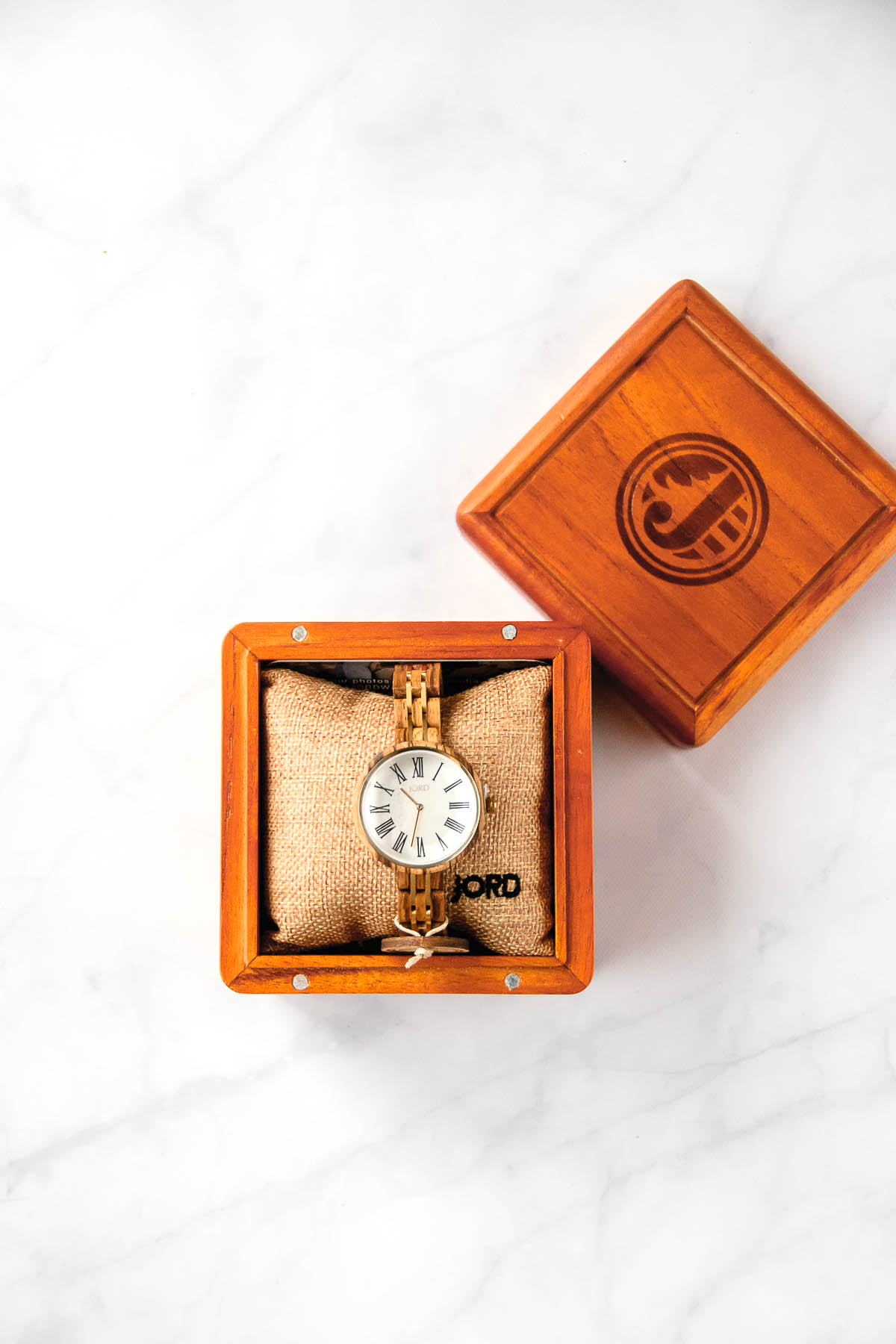 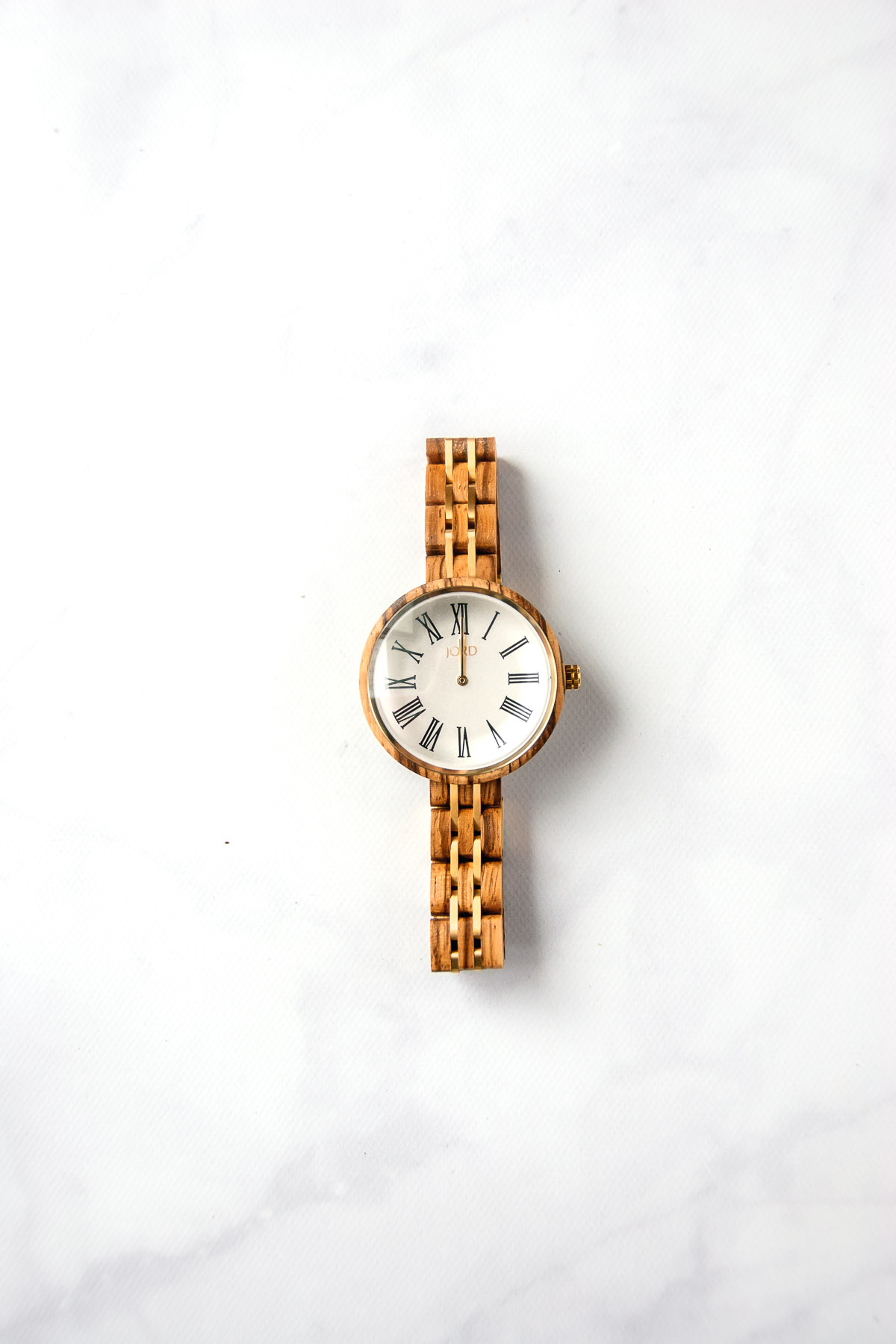 While we were out shopping I was able to keep track of time, and where we were in the cinnamon roll process, with my JORD wood watch. I have the Cassia Zebra and Ivory wood watch, it’s a part of their women’s collection and from the moment I saw it I fell in love with the natural look of the wood and the elegance of its thinner band and wide face.

I have a very small wrist (which is great for making my own jewelry, fewer beads means less expensive!) but it can be a bit of a hassle when buying watches because they are way too big and need to be adjusted. JORD fixes all that before the watch even arrives by having measurement instructions and custom fitting the watch to them before shipping. I was also really happy that they sent a few extra links in case I needed to adjust my watch in the future.

They also sent conditioning oil for the natural wood and cloths to clean the watch. I also really like the wood box the watch comes in; it’s well made and has a discreet little drawer to store other jewelry – LOVE IT!

As I said before I used it to make sure we were on cinnamon roll recipe success, but I think a JORD Wood Watch would also be a great gift for everyone who loves watches. When my boyfriend heard I was working with JORD he tried to convince me to get him a watch! Besides the women’s collection, JORD also has a great men’s collection and offer personalized engraving.

Although I didn’t get him a watch this time, I told him he could enter their 100$ Giveaway – and so can you! By clicking the link and filling out the form you’ll be entered to win a 100$ credit towards your JORD purchase! The giveaway closes on February 25th at 11:59pm and if you don’t win, NOT TO WORRY! Everyone who filled out the giveaway form will be getting a 10% off discount code when the giveaway ends! 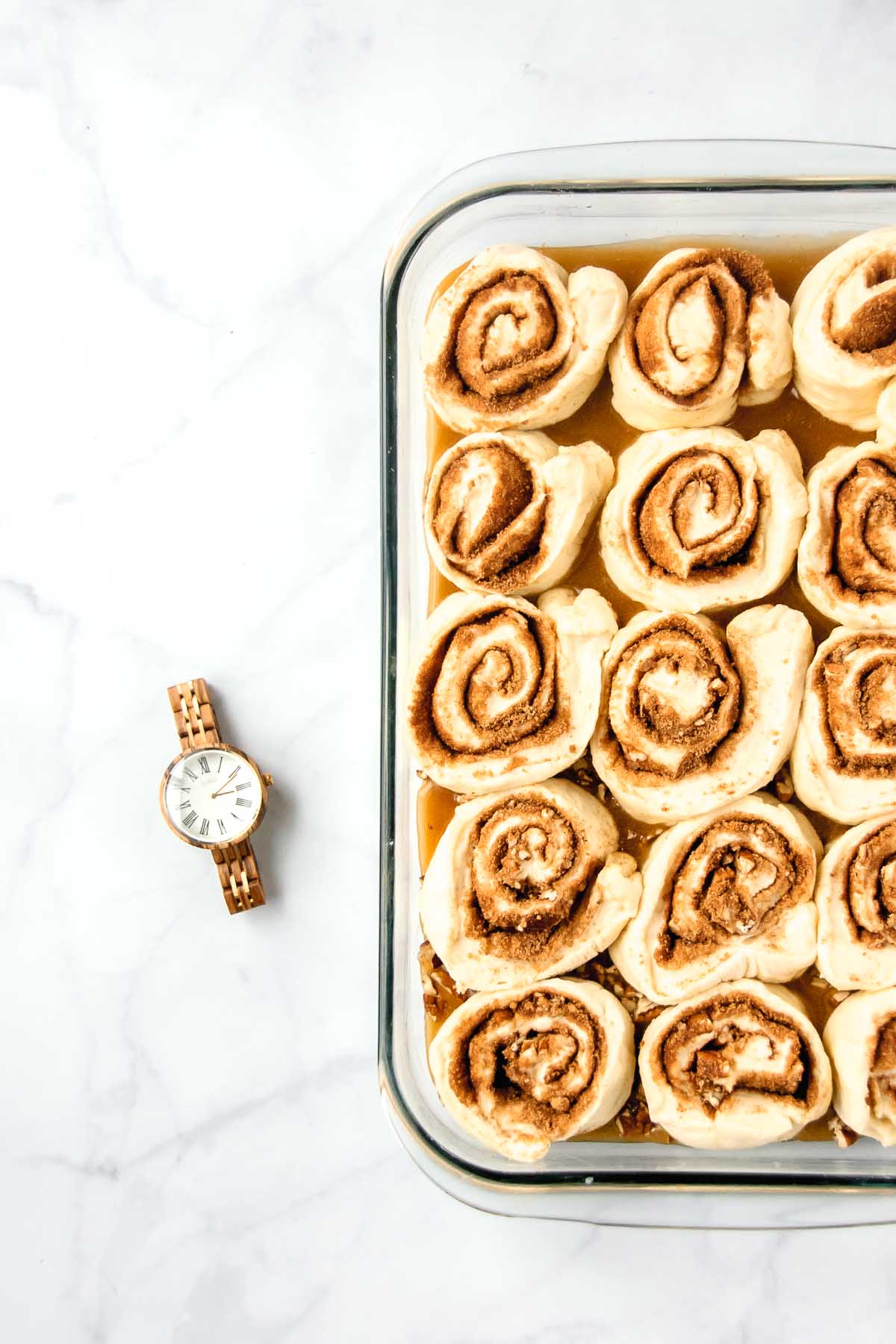 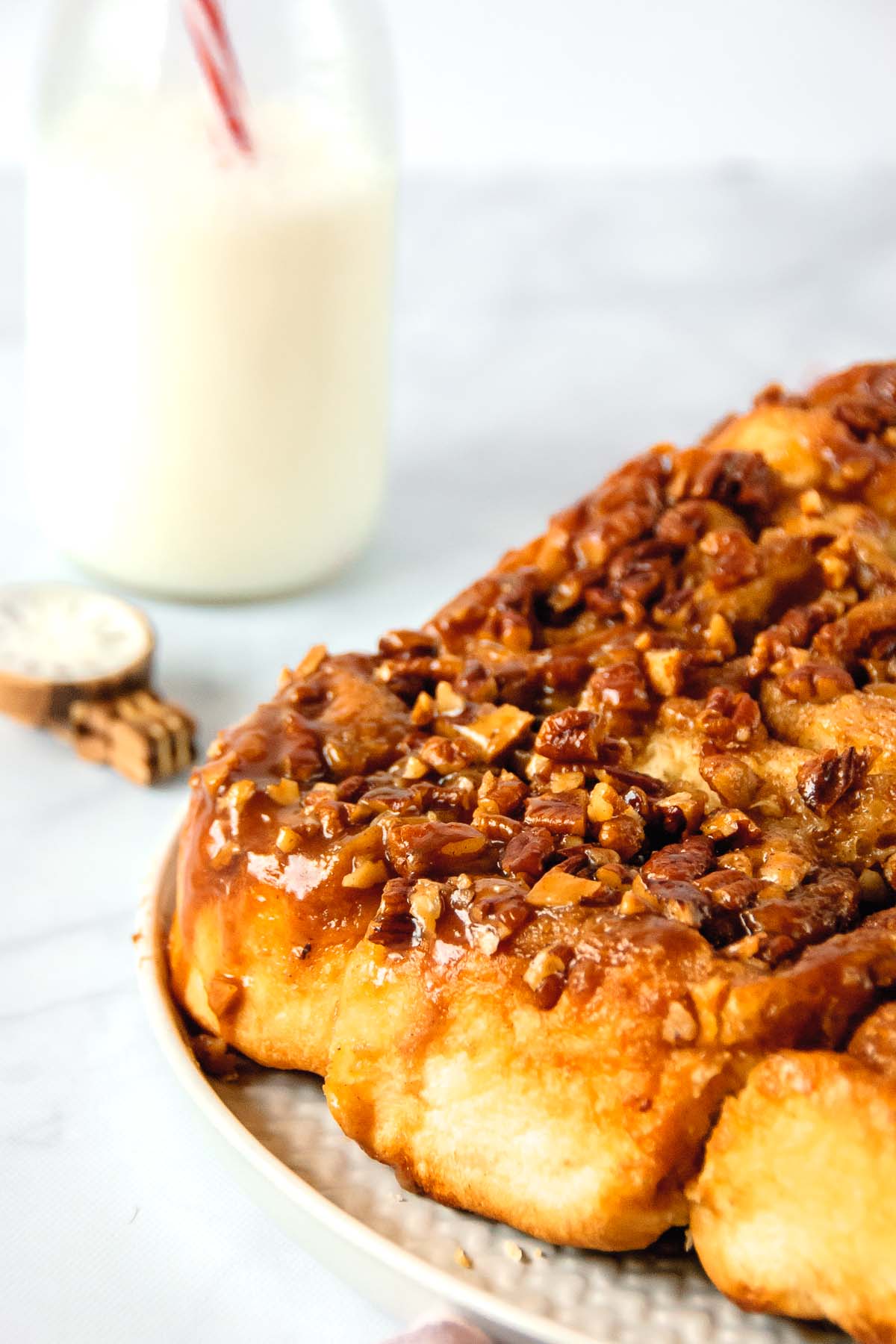 Just before writing the post I had a bit of a panic attack! What are these delicious, doughy, sugary, cinnamon thingies in front of me? What’s the difference between a cinnamon roll, a cinnamon bun, a sticky bun and (to make it more confusing) Chelsea buns???

While doing this I realized that maybe this recipe is not for cinnamon rolls/buns but for sticky buns. Cinnamon rolls (& buns) have a cream cheese icing whereas sticky buns have a caramel topping – oops! These have a caramel-like topping of butter and sugar! Then I also read that if you add raisins to the rolls they are not cinnamon buns or sticky buns but are Chelsea buns!! SO CONFUSING.

So with all that, I’m going to break whatever standard is out there and stick to using cinnamon rolls for this recipe, because that’s what my family still calls them! 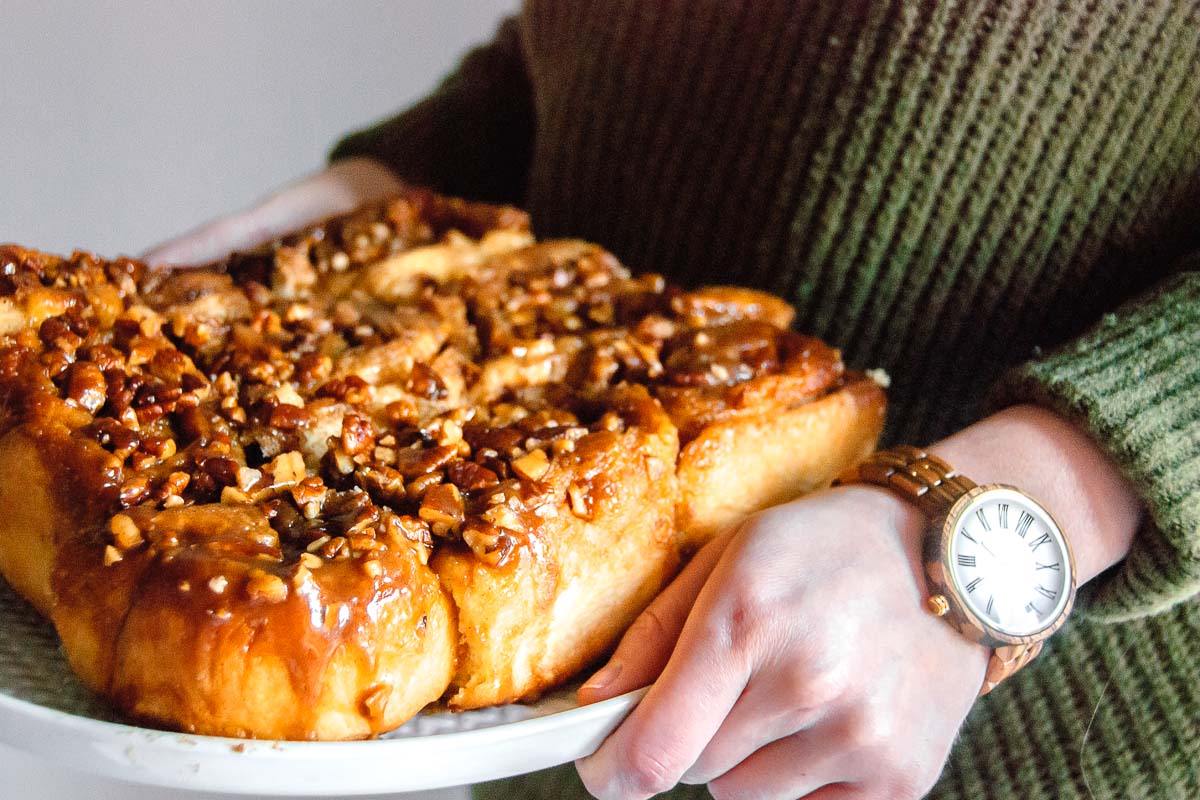 Whatever you want to call them, I think this recipe is perfect for Valentine’s Day. They do take a longer time to bake than a basic cookie or cupcake, but they are not that much more difficult – do not get intimidated by yeast or having to let your dough rise or having to let it rise again once the rolls are formed – this is called proofing. Just keep your rising dough or cinnamon rolls in the warmest corner of your kitchen and you should be good to go! 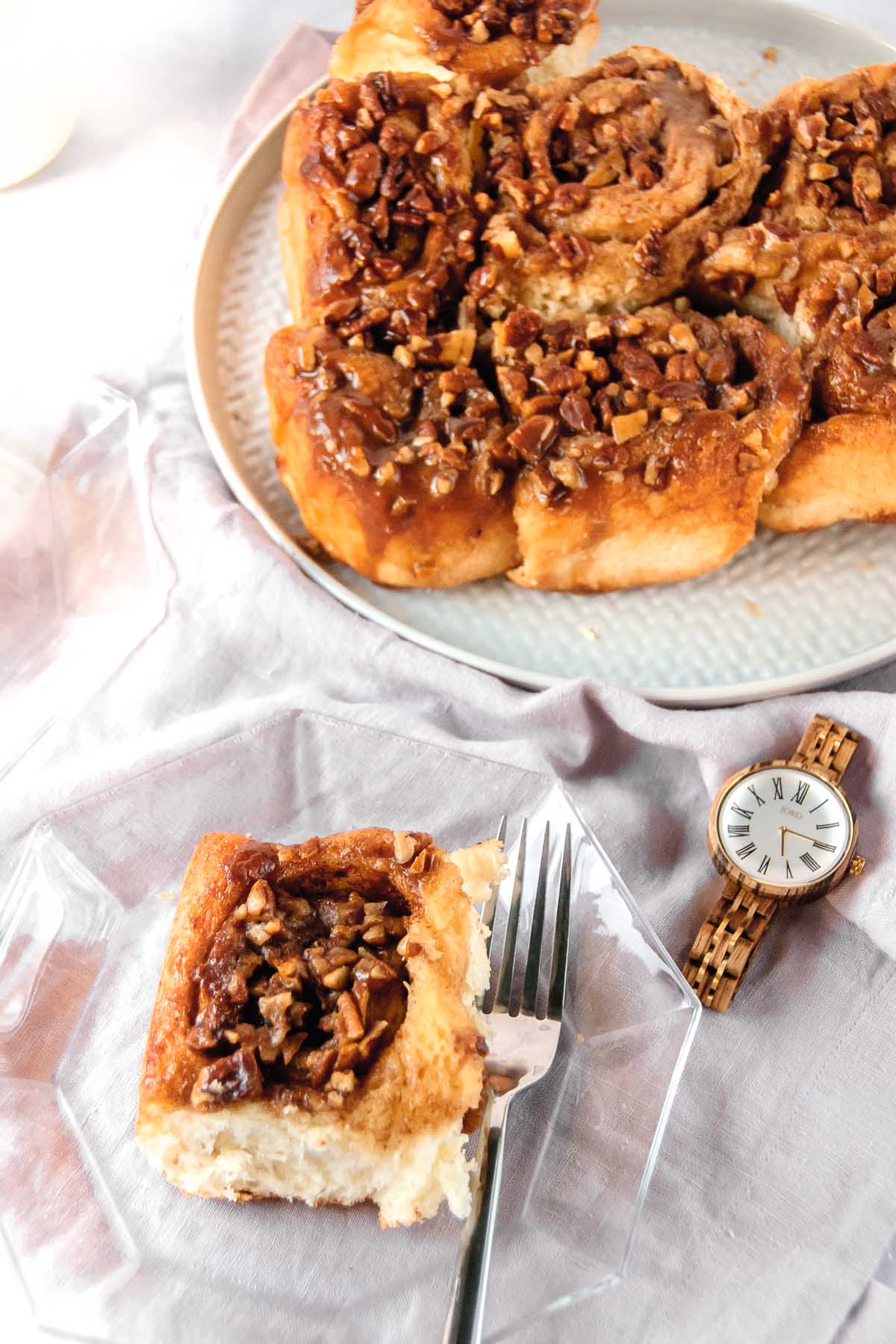 I believe the time it takes to make these cinnamon rolls is well worth the Valentine’s Day treat. Don’t worry if you’re just two people with 15 cinnamon rolls on your hands! You’d be surprised how fast you will go through them. And you can always experiment with freezing and I will experiment with creating a small batch version of the recipe! Plus: you shouldn’t feel any guilt because if you follow my mom’s thinking you only get them once a year!

P.S. Although all of these links are already in the post, here are the some useful JORD links again! 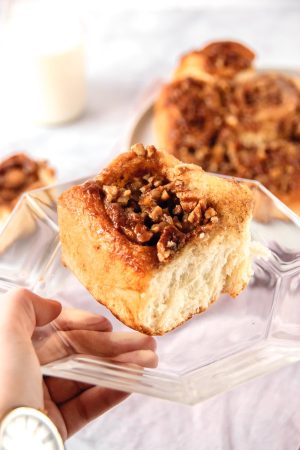 Putting it all together:

If you are allergic to nuts, you can easily omit the pecans in the recipe.

Don't be scared of the 3-hour prep-time! 2 hours and 30 minutes of it you can be doing something else as the yeast works hard rising the dough!

I love to read the origins and tidbits of your recipes and especially the warmth it emotes when shared with family. Keep ’em coming. 🙂