Away from the lab, computer and kitchen, I went to the beautiful white mountains to enjoy a getaway filled with views, new experiences and, of course, delicious food! Not to mention maybe a little too much vino and Miller Lite. 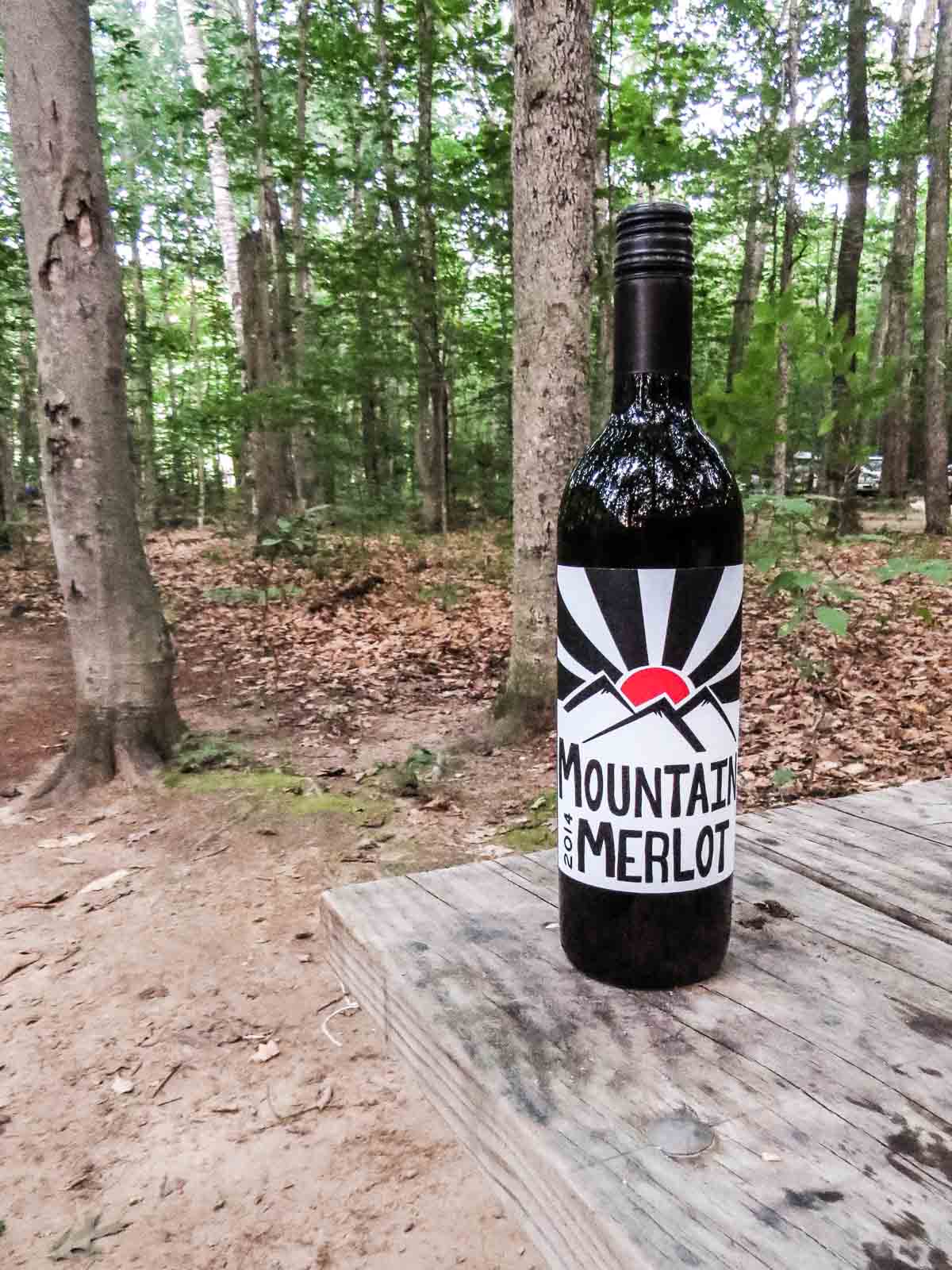 So why have I missed blog posts?! VACATION!

Instead of trying to plan and schedule out blog posts and social media things before my departure, I decided that a real break was necessary. A break from work/school at the lab, my lovely MacBook, my kitchen and for the first couple days, my cell phone. The beautiful White Mountain National Forest has areas with no cell phone reception, which included Crawford Notch Campground where we stayed, and I couldn’t be happier.


But before talking about the amazing views seen on our hikes or the fun we had on our somewhat secluded little campsite, I have to talk about our way down!

Driving down to the beautiful White Mountains

Three words can describe our drive down to New Hampshire from Montreal: exciting, horrible and beautiful.

Exciting: We, my boyfriend (aka. wanna be Forest Ranger) and I, were super excited to be taking some time off. We had many ideas about what we wanted to do this summer but as the summer kept flying by we dragged our feet and didn’t commit to anything – until he realized that I had never been camping. From that moment on I knew I couldn’t get out of camping this summer, and to be honest I didn’t want to, new experiences are what keep life exciting… and maybe a little nerve wracking.

Horrible: The wait to get into the USA at the border was atrocious. I think we waited over an hour and a half and our tempers rose when we saw other cars and trucks cutting into our lanes from the duty free shortcut or the commercial lanes.

I say it was horrible because I actually got to colour in my adult stress reducing colouring book that I got for christmas two years ago – this is a miracle because I usually get car sick looking at a phone for more than two minutes. Basically our car was in park and turned off during most of the wait – like I said, horrible. But, we should have expected this due to the Quebec construction holidays – we were naive and didn’t plan properly.

Beautiful: Not that driving through Quebec and Vermont is not beautiful, the greenery is a great change from the greater Montreal highways and boatloads of construction. However, the glorious mountains you see as you get closer to the national forest are magnificent – maybe a little car sick inducing because of the curves in the road – but still a wonder to see.

Of course, no taxes are also nice and despite the still pretty big gap between the Canadian and American dollar, we decided to do all our groceries, including beer and wine buying, in New Hampshire to avoid any problems we may encounter at the border.

Just imagine waiting that long to be stopped at the border for a vehicle inspection because you had a food item you couldn’t take over. 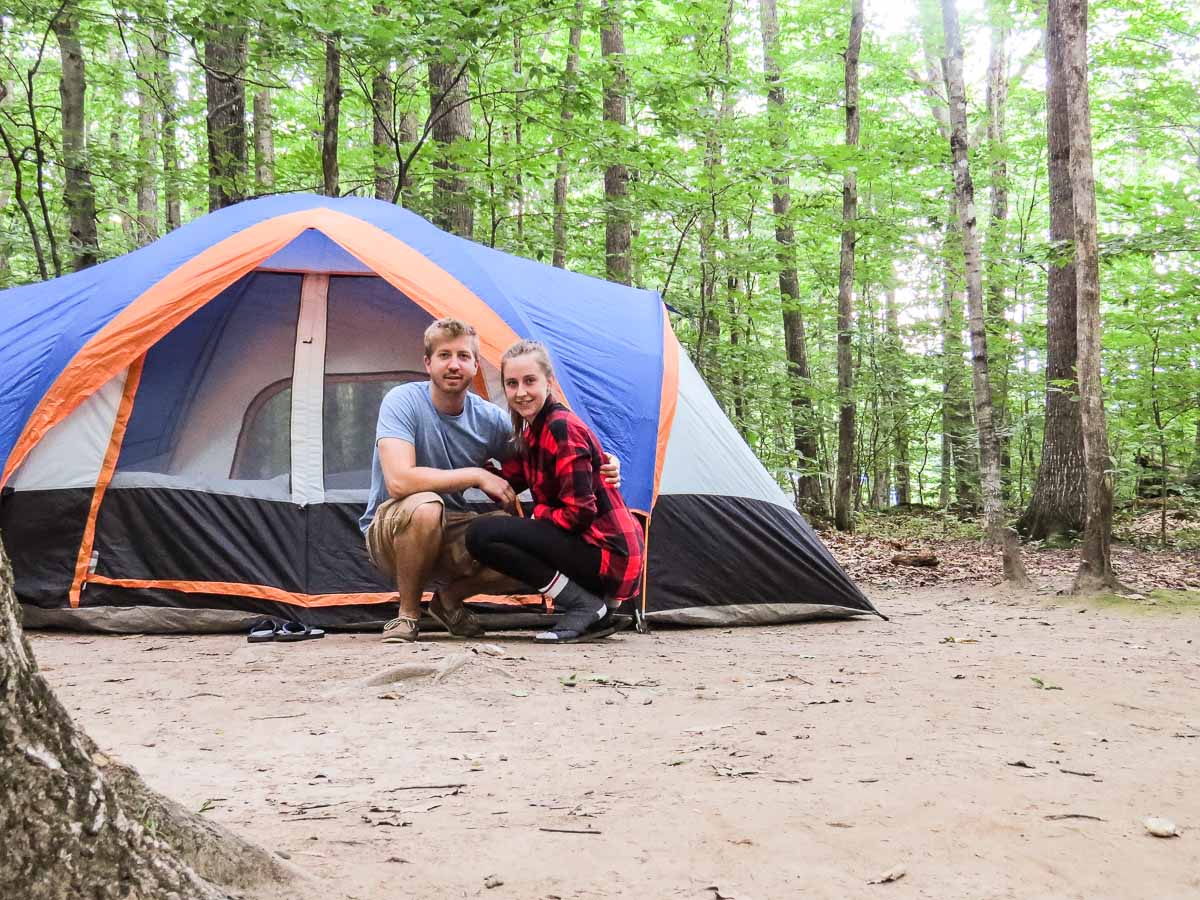 When Forest Ranger and I made it to the campsite we were super sick of being in the car, making it into nature was a welcomed relief – until he made me read all the bear warning signs!

I did not know that leaving food out was that critical when camping in that region, and to be frank it was a little scary to think that bears might be roaming around the campsite as I slept in a thin, easily broken by a claw, tent.

Of course everything was ok though!

We set up our site, cracked open a Miller Lite each, the drink of choice when Forest Ranger and his Dog go on business trips to the US (right now I think this sentence is hilarious, but it’s an inside joke, I’m sorry), and got going on supper.

Apparently we got going on supper much later than everyone else on the campgrounds, and with the disappearing sun any good chance to take good pictures of our fire roasted peppers and zucchini seasoned with garlic and grilled chicken. 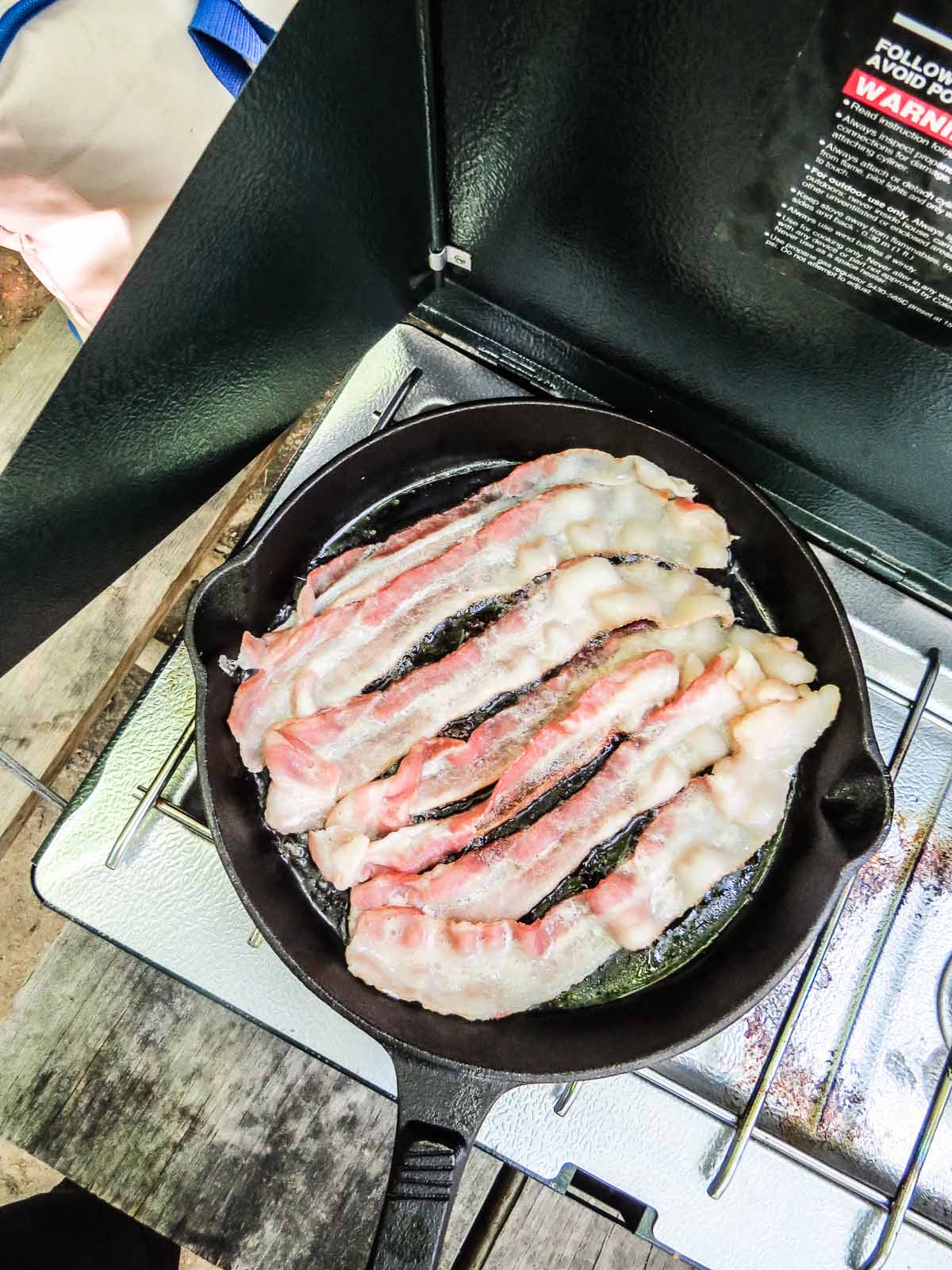 The next day I made our weekend staple bacon and eggs breakfast, even though it wasn’t the weekend.

It was surely a different experience… Of course with the bear warnings I wanted to make sure I didn’t get bacon grease splattered everywhere – I have yet to met a human that didn’t like bacon and I’m sure the same can be said for bears.

Next up was a drive to the information center for Crawford Notch!

The very informative clerk gave us suggestions for hikes in the area, and after a bathroom break and a little taking in the views at the base, we decided to take the Mount Willard trail. Being told that the hike itself was about three hours, we thought that only one hike was in store for us that day… 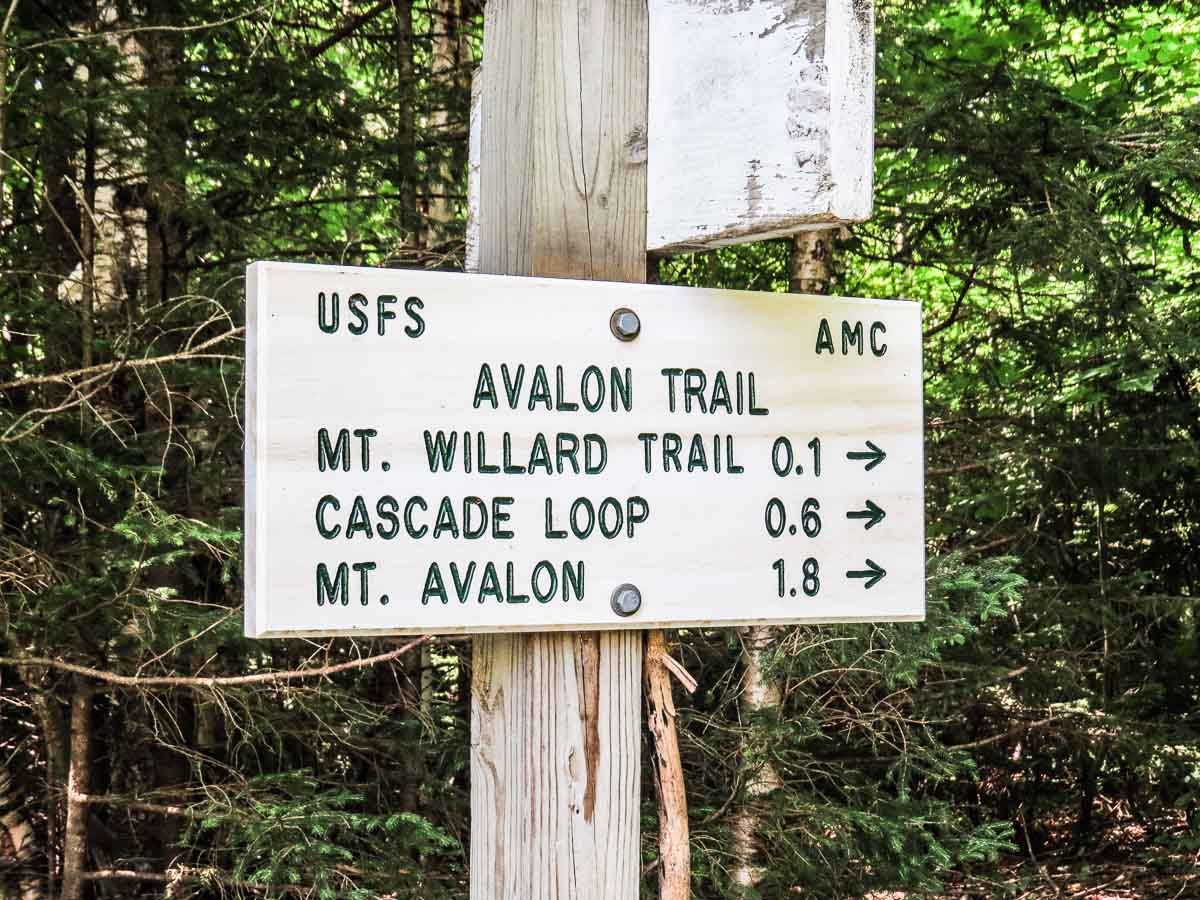 … but I guess my trip hiking in the Swiss Alps with Forest Ranger last year prepared us well for our hiking and we got up to the top in forty-five minutes. I do have to say seeing the break in the trees at the top and then seeing the views was something to behold! 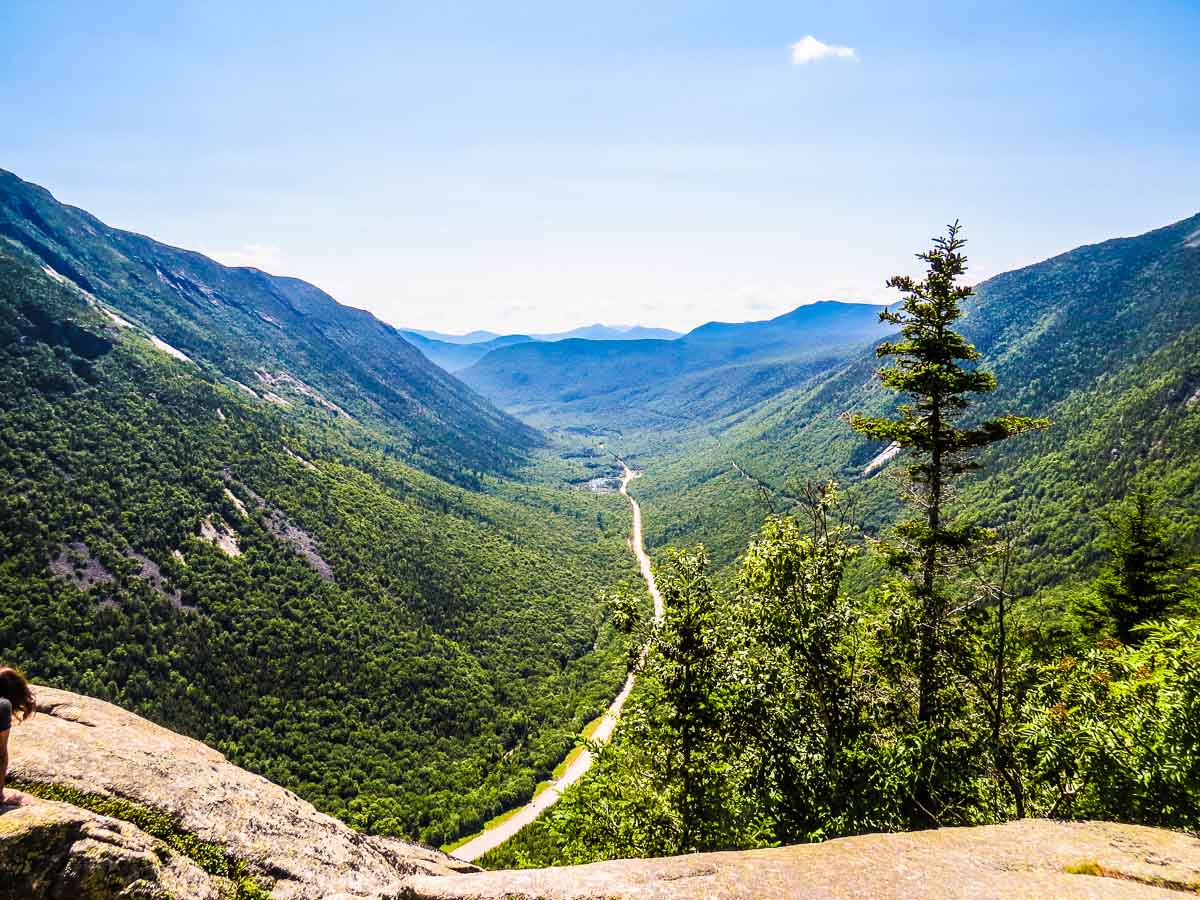 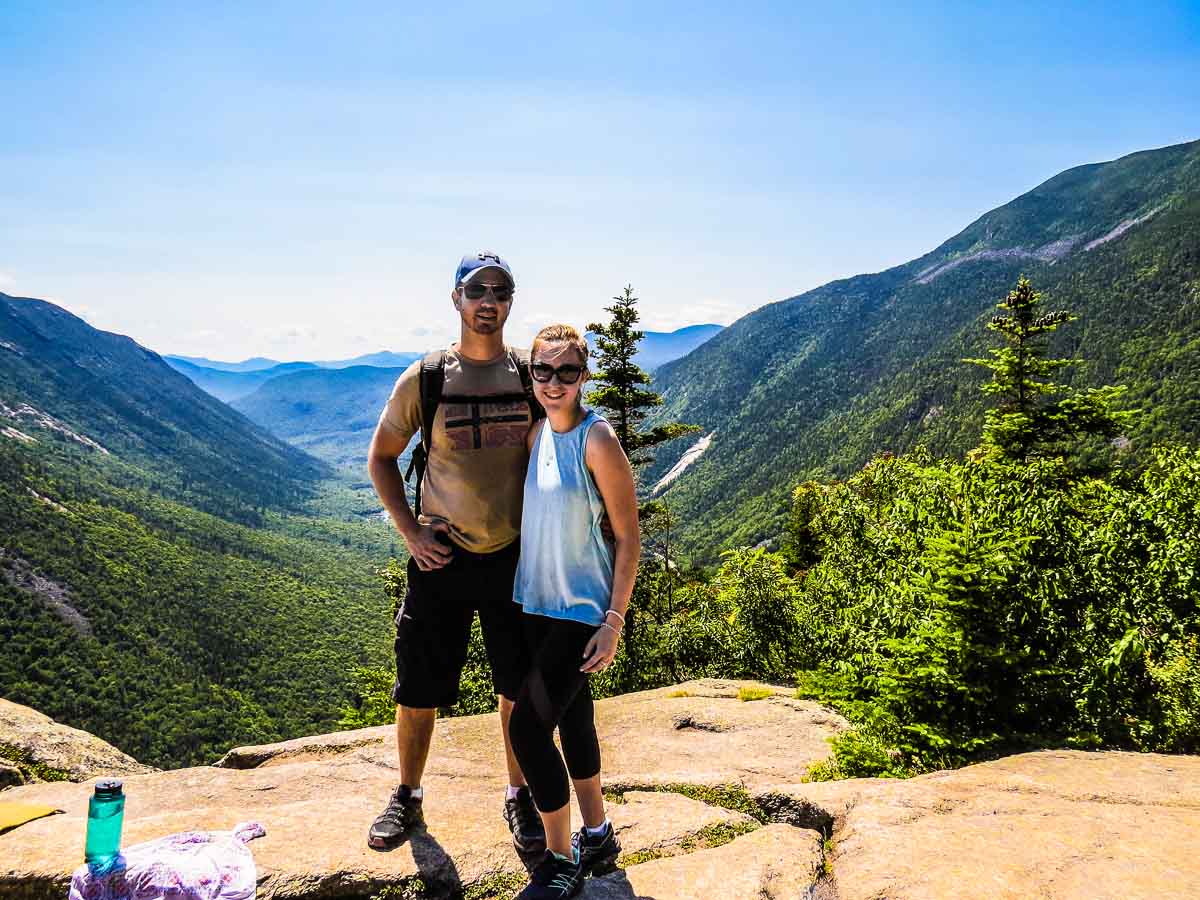 We also saw this really strange insect at the top… IT CREEPED ME THE HELL OUT! 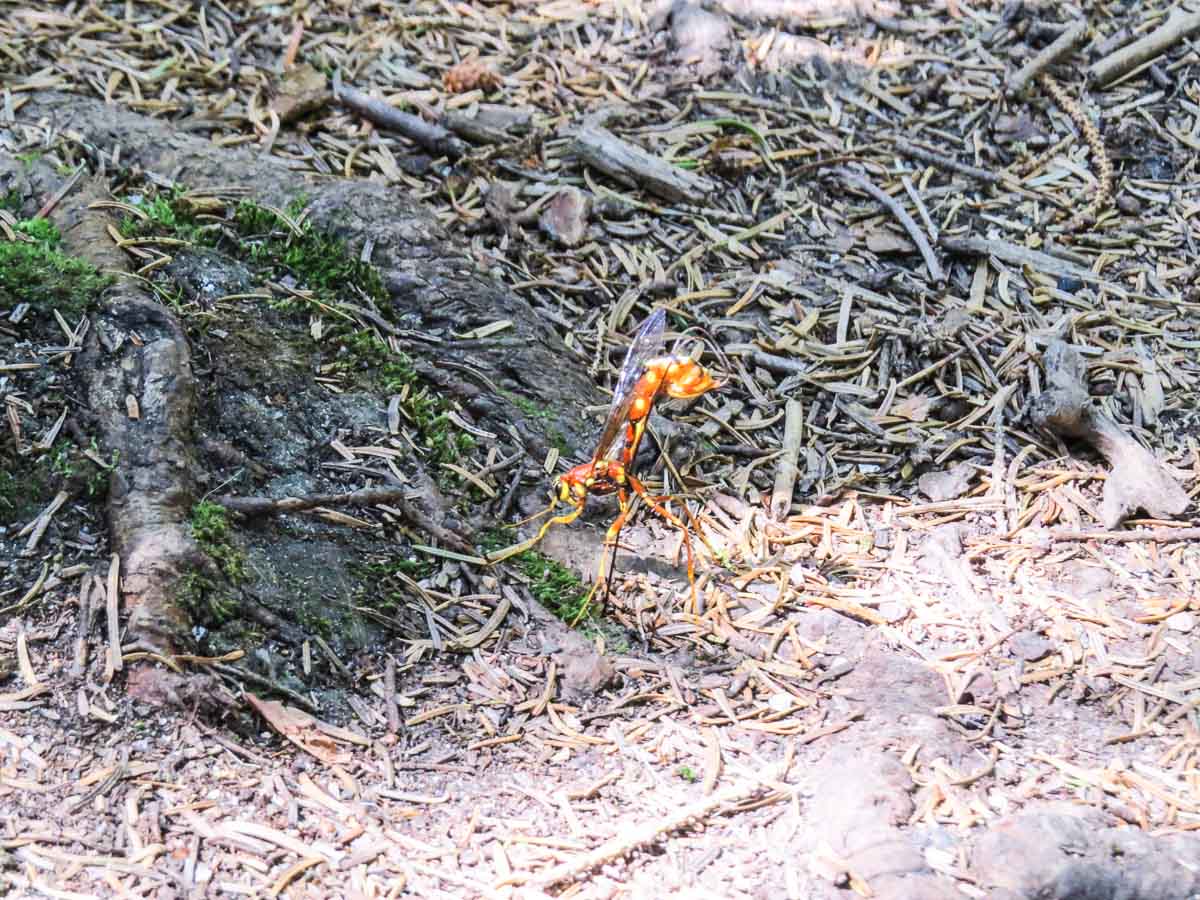 I couldn’t even take a picture of the insect, photo creds to Forest Ranger on that one! And to the woman who took our photo together… Often times we both forget to take pictures of us at the location!

That said, what we thought would be a ideal hike for the day left us wanting more.

On the highway we had seen a sign for Ripley Falls and decided that the forty minute hike to the falls (which is partially on the Appalachian Trail!) and back would be just enough before we decided we needed to take a dip in the Saco River or spring for a shower at the bathhouse. 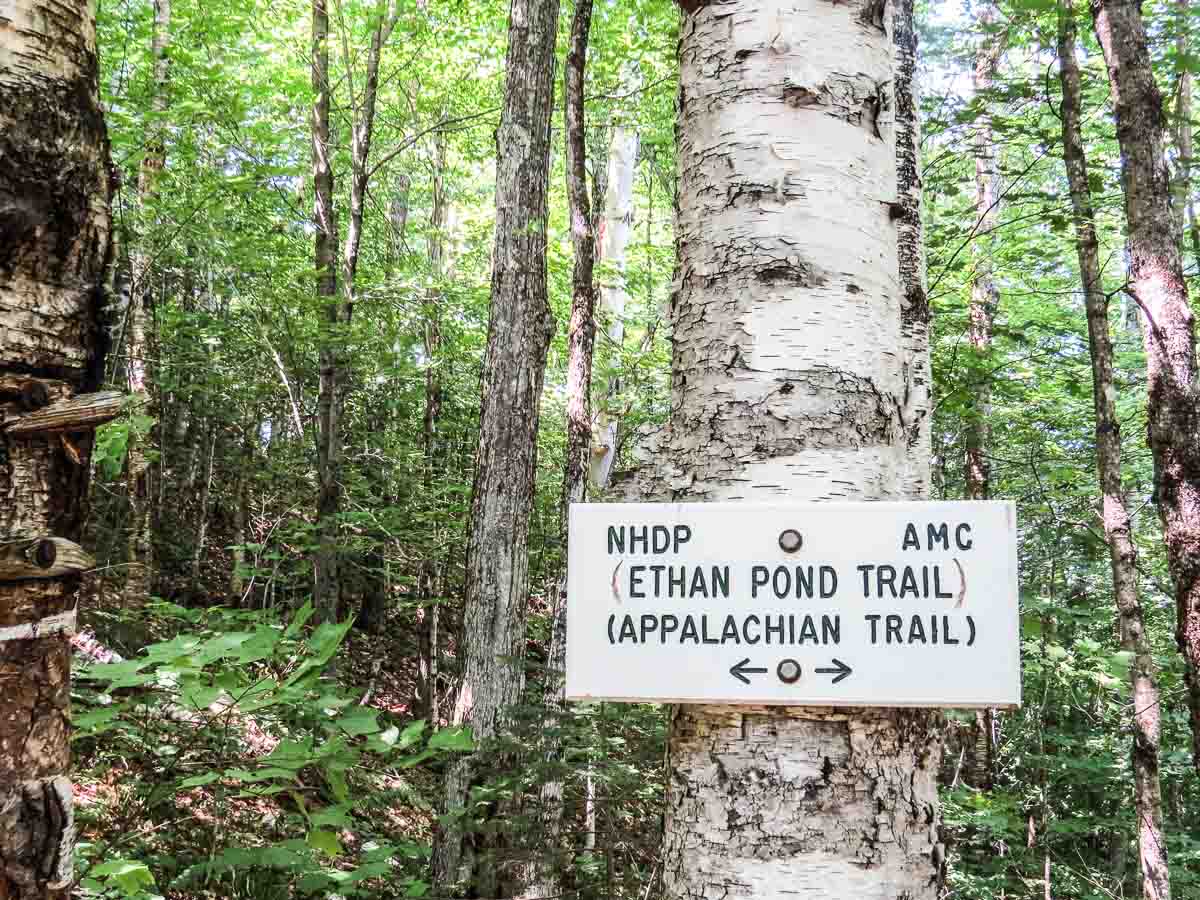 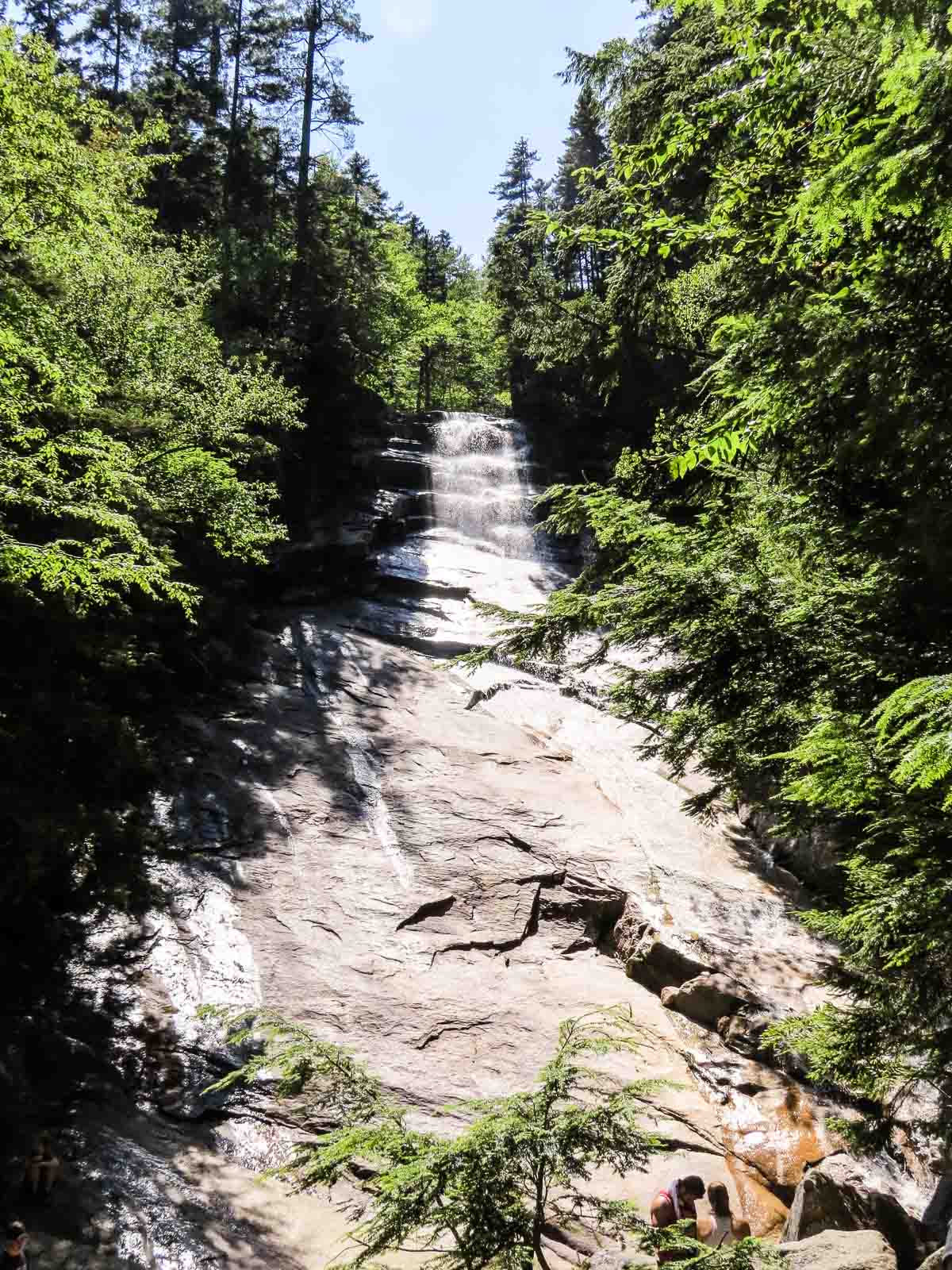 Shower it was for us after these two incredibly beautiful hikes – and because we had access to a bathhouse, had a six person tent for two, drank a cool bottle of wine that decided to keep as a souvenir, and ate yummy food throughout camping (and even on our second leg of the trip, detailed in the next post), I guess you can say we had some touches of glamping during our stay at the Crawford Notch Campground.

Food after our hike and showers? Somehow more delicious than it should have been… but I guess that is what camping hot dogs do to you…

When we did the groceries we had decided that one night should be reserved for hot dogs, but we didn’t want to have to buy condiments, and the grocery store didn’t have traditional coleslaw premade – so we bought the hot dogs and decided we would come up with something on the fly.

I dunno about you, but a hot dog with Buttermilk Ranch Heluva Good dip started to sound pretty good as we started thinking about food.

Instead, taking the bag of spinach we bought that was destined to become partly a yummy appetizer sautéed in olive oil and garlic on bread (which we did have!), an addition to scrambled eggs and a strawberry spinach salad. We decided to sauté the whole bag with garlic and have both our planned appetizer/snack and gourmet garlic spinach hot dogs that were cooked skewered on a branch over fire! YUM! 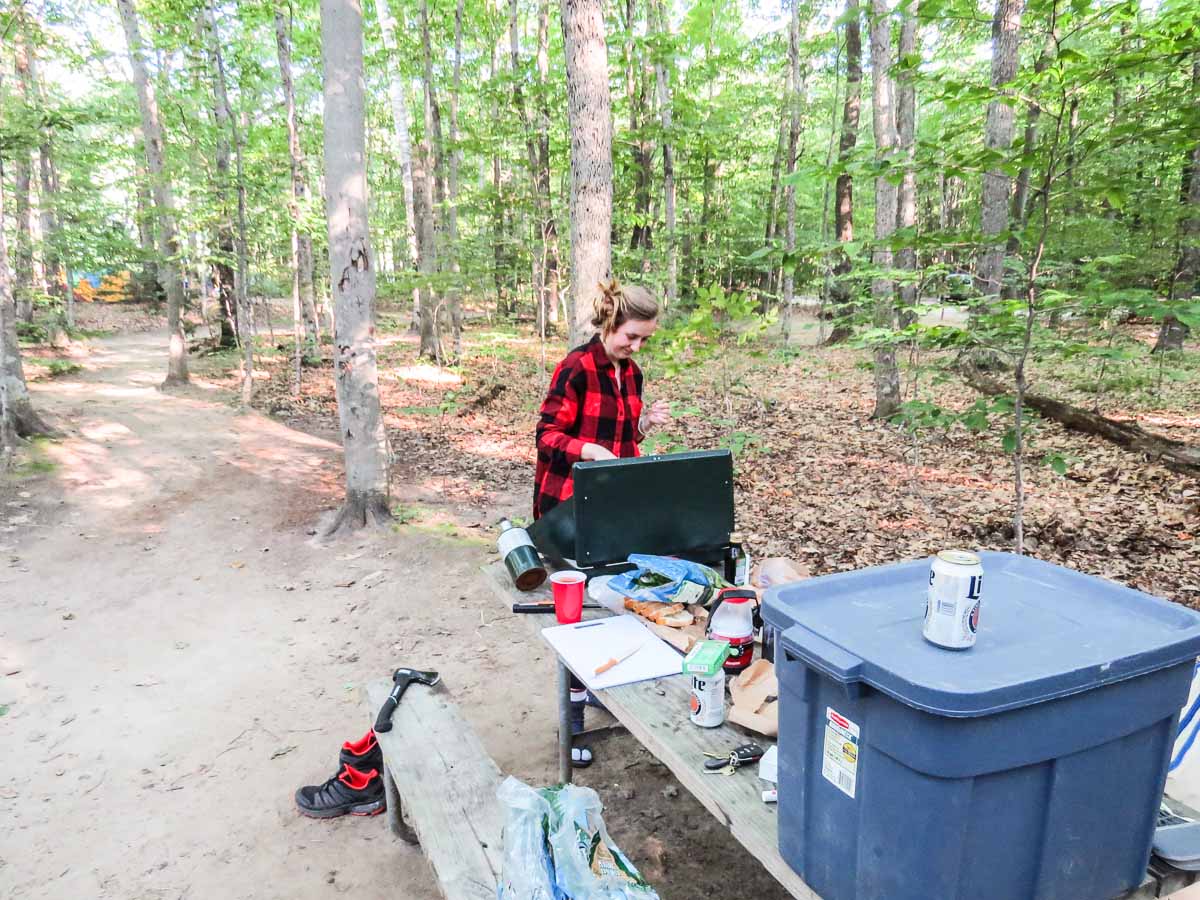 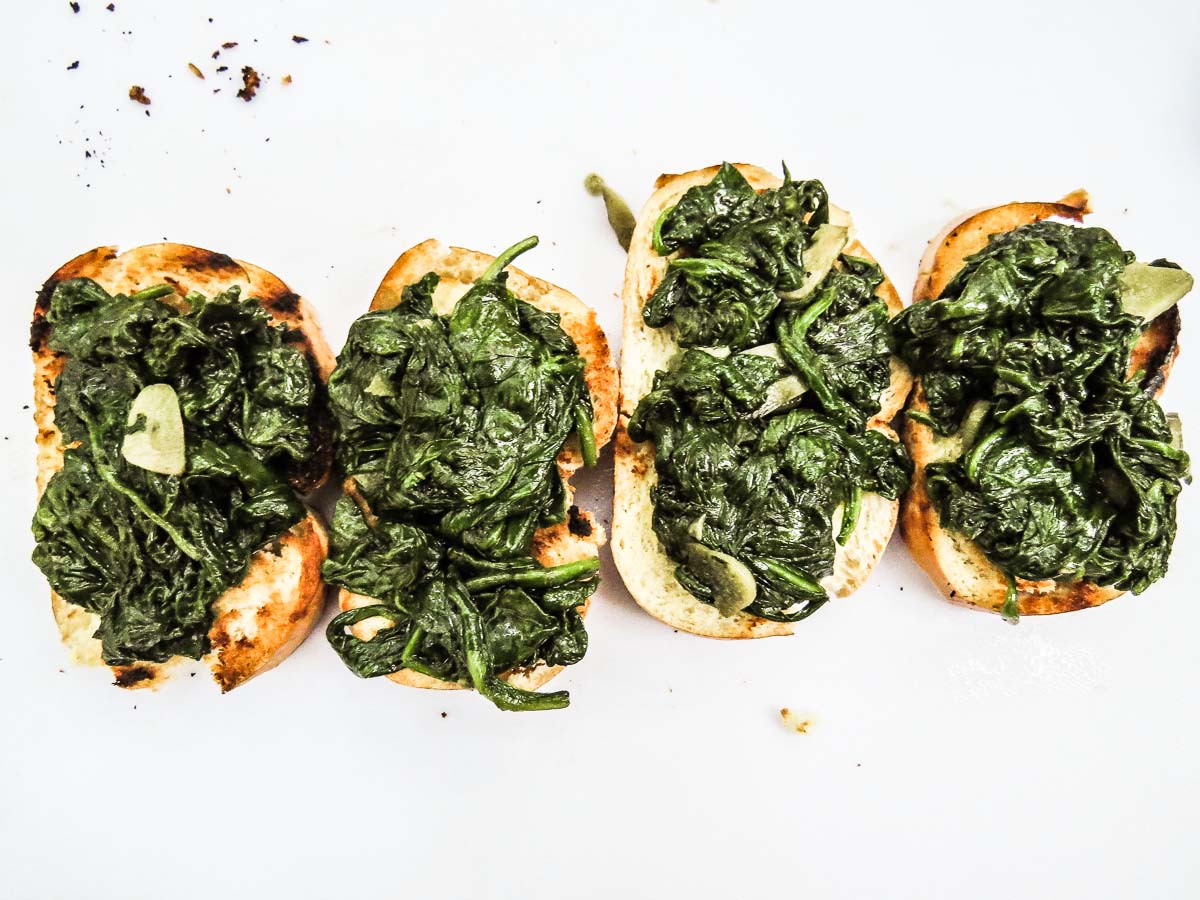 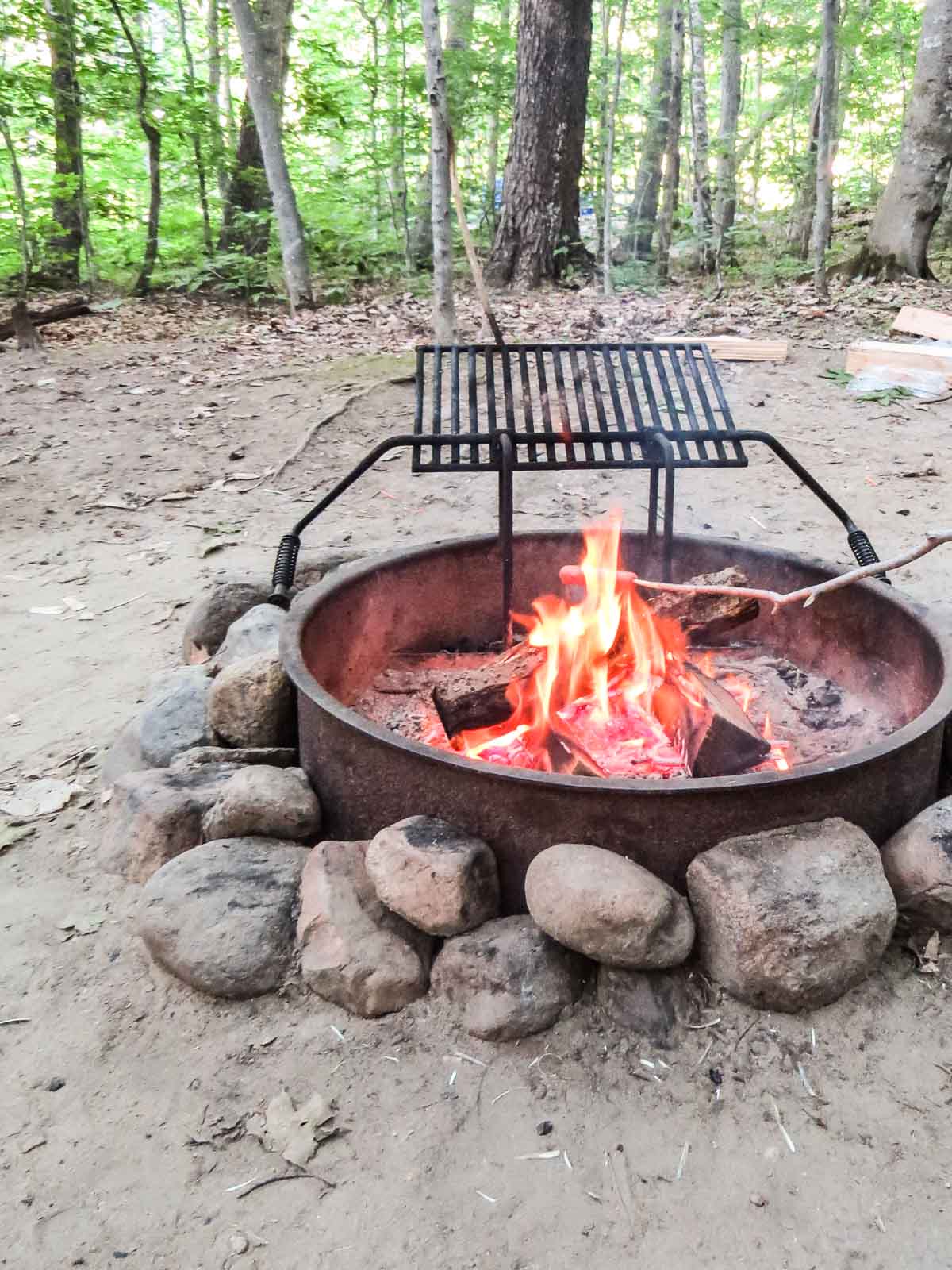 It was definitely early to bed that night, although it seemed like we were one of the last ones up in the vicinity of our little campsite.

The next day we packed up and headed to….