Charred peppers are a quick and delicious appetizer that is not only tasty but entertaining! Mix up the pepper combination with some mild and semi-hot peppers and have fun eating them whole dipped into tzatziki or a garlic aioli!

So remember how I said my favorite app was LinkedIn Jobs last week?! Well, it’s back to Instagram because… I got a job!!! It definitely happened faster than I had expected but I could not be happier to start this next chapter!

Charred peppers on the road

After writing my master’s thesis my boyfriend and I took a little break from our lives and went to California. Although he has been a lot for work, I still have not fully explored the beautiful state.

We visited San Francisco, drove the One to Monterrey and then through Big Sur, then headed back to the bay area for a meal at Chez Panisse (a bucket list of mine) and then off to Napa – where although I wish I could have eaten at The French Laundry (a little expensive on a student budget) I still was able to eat at a Thomas Keller restaurant. Let me tell you, Ad Hoc does not disappoint.


Now, although we did not have charred peppers at either of those two places, they are definitely a dish that stood out! We enjoyed them for the first time dining with friends at Nopa. It was a mix of different pepper types, beautifully charred sprinkled with salt and served with tzatziki. We had a lot of fun biting into the peppers discovering which were semi-hot while others were mild. So naturally, when my boyfriend and I were at the Boon Fly Cafe and saw charred shishito peppers served with garlic aioli on the menu as a starter, we just had to order them.

Charred peppers back at home

Thanks to our amazing markets in Montreal (and some great grocery stores) our deliciously simple starter of charred peppers was able to come home with us!

The first time we made them we charred them on our grill outside and served them with what I call “cheat garlic aioli”, which is (Lebanese garlic sauce) thinned out with olive oil and an egg yolk. That time we used a mixture of long red Italian peppers that were both mild and hot – but the hot too hot!

The second time, we made them (those that are pictured!) we mad a mix of the mild long Italian peppers with shishitos that we broiled and served with tzatziki.

Ultimately both grilled and broiled is amazing, but if your grill/BBQ takes a long time to heat up, the broiler is the faster method – you don’t even need to wait until your oven beeps!

P.S. I really like placing the dipping sauce underneath the peppers so that every bite of the pepper has some sauce without double dipping! 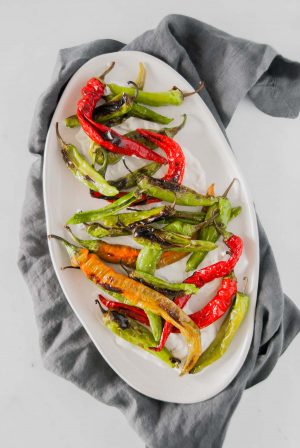 A quick and delicious appetizer that is not only delicious but entertaining! Mix up the pepper combination with some mild peppers and some with heat and have fun eating them whole dipped into tzatziki or a garlic aioli!

Make sure to puncture the peppers or else you will hear them popping in the oven.

The oven does not have to reach 500F. Once you’re ready you can put the peppers under the broiler immediately. Make sure to watch them so they don’t burn!

Alternatively to the broiler, you car char the peppers in a skillet on a stove top or on a very hot grill.